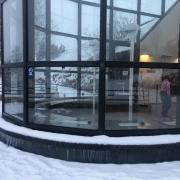 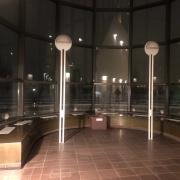 
Changes on Northern Shore – Observing Problems through Art
visited Arktikum in Rovaniemi, FI and contributed with art works within the existing exhibitions.

Presentation of: TRACKS – the sounds of reindeers.

The glass construction formed the center of Arktikum and was called the tube. At the end the tube ended in a curved space with beautiful view to sky and landscape. It invited to an ideal location for the project with a build in bench to sit and enjoy. The sound could by use of contacts speakers attached to the windows create an ideal location for a sound installation and function for listening both indoor and for hikers on the outside path.

When installing I was challenged by the loud sound from ventilation construction build into the bench, which appeared a great deal louder than expected. How the sound travelled in the space was another difficult dimension to work out.

Working in this interesting location for days the outcome consisted of tree sound plates placed on a box and all windows as speakers. The sound composition was composed with the idea to run in a circle like the reindeers within the fences but cables on the floor was prohibited and a compromise by changing became the final solution.

Indeed the sounds were difficult to hear at the windows but another phenomenon occurred because it traveled into the tube (maybe due to the ventilation system) and could be head in the middle of the building space.