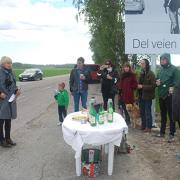 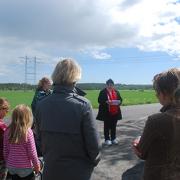 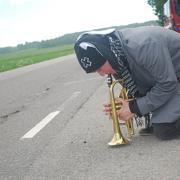 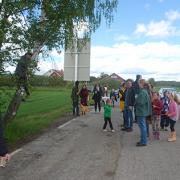 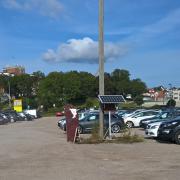 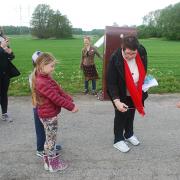 We want all drivers whether they have or not a knowledge in the field of art to reflect through a summer hit - using the same melody and changing the lyrics, on contemporary questions in Norway. We see in the previous summer hit of 2014 in Norway a good way to make our idea as it is within parody in Spanish word used in the hit. What is very interesting to us, is to change the lyrics into Norwegian and see if that might pose a similar parody, as the artist has approached creating a song with a Scandinavian version but there is not existing yet one purely in Norwegian.

A3-stau consists of layers of treated and manipulated no-input feedback. No oscillators, recorded sounds or samples from other sources were used. The qualities of feedback are reminiscent of traffic ("Stau" = "traffic jam" in German) – appearing out of nowhere, moving slowly, coming to a halt, speeding up, circling around, turning, vanishing. "A3 – Stau" does exactly that: The sound is static, but at the same time dynamic and constantly moving. The pitch changes, shifting modulations and pulses created by the feedback are simultaneously tranquil and physically overwhelming. Even time seems to slow down.
http://www.thomas-tichai-bedachungen.de

Based on the concept of the curiosity chamber / Wunderkammer of the 1700's, the work consists of a collection of sounds that reflect upon mysteries on Earth and in space.
The sounds are: The Bloop (the sound of the biggest underwater creature that has ever been recorded), Andalusian bees, ringing bells from Alora and the sound of North and Southern light around Saturn.
http://www.locusart.org

Somewhere in the field of dissolved time that is Traumatic Wunderbaum, lies the continuity that was before the wound. Nothing explanatory, not symbolic, no illumination, rather this is the elegiac sound crystal that contemplates both the disappearance, and the hauntological cycles of return that constitutes the trauma. Enter this void: fragments of memory and terror forms new temporal architectures of melancholia and desire, a process of constant reconstruction, doomed to fail. A glass house of aural chards, time's broken tissue. It is the promise of immortality and the soft whisper that says: "Maybe the next time, darling. Maybe the next time".

One divides into two, two doesn’t merge into one

One divides into two, two doesn't merge into one

The performance starts
he opens up the piano

lifts off the lid and places it by the wall
Unscrews a screw, adjusts the wood
sighs, looks up
unscrews the next screw

sighs
presses down a key
she walks over to the piano
he presses some low keys to test
left hand on a high key. Thumb on C

The sound piece Ringing Stone is an audio recording from a small stone that is tapped on a larger boulder, named Ringing stone. It is to be found on the Scottish Island of Tiree. It has been, carried by the ice that covered Scotland during the last ice age, and has a number of cup markings. When struck it sounds as if it is hollow and made of metal, just as if you were striking a bell. Legend has it that if the boulder is ever broken, so will Tiree sink below the waves.
http://www.christinareenbergjensen.net

A journey. Where does it start? Does it have an end? Nobody knows. It’s up to you; you are a part of it, all the time. Wherever you go, whoever you meet, all the traces you leave behind at the places you have been. Every day, all the time. At the same time, the world is changing. Everything you do affects the world, while the world affects you. An eternal circle. I see circles in the landscape. They are moving. Up through the woods, down towards the water. They are coming this way, to me. I am standing in the middle of a wheat field. I become its centre, the connection between our time and the time that we are not present.
The sound of a car, it approaches and passes by quickly. I didn’t see you. The asphalt that was laid across the whole field. Ploughed its way, to get by.
The wood is waiting. So does the water. The eternal coastline. They are talking with their own voice, their own language. What are they talking about? I’m merging into their voices, falling into a polyphony, making new landscapes between me and the surroundings. Where are the borders between them?
The landscape is gradually changing when we travel from one place to another – just like it gradually changes through time.
http://www.cpiene.no

A hörspiel before the hörspiel. These recordings live between episode 2 and 3 in the Frank Walker series. A series that explores language, sound, different realities and hörspiel as genre.
These short pieces are in the form of tone poems anddescribe Frank Walkers two main characters (Frank and Cincano) trapped between two realities og has been given the title In limbo.
episode 1:
http://www.marsmelons.com/portfolio/mmx046-thomas-bergsten-frank-walker-episode-1/
episode 2:
http://www.marsmelons.com/portfolio/mmx072-thomas-bergsten-frank-walker-episode-2/

Tell me the truth

Tell Me the Truth

In an attempt to reach the truth you can look in all kinds of directions. You can turn off the television and step into the world. But where should you go and whom should you trust?

The project is based on real people and all stories are collected from Syria. The people are found through social media in a search trying to be as broad and representative as possible. The one thing they have in common is their direct knowledge of how it is to live in a country at war. Some of them are still there, while others have escaped.
The project depended on their willingness to share their stories and reality.

I thank them all from my heart for their contributions.

The work is in Danish, and is made from the idea of how the two words "Gemt /Glemt" have a similarity in written, but their meanings are very different. The work is also about when you have something to say, but then you forget it.
The same as if you are holding something in your hand, that you bring along to remember, but then you forget about having it in you hand after a while. "Gemt men Glemt" is in short a work about remembering and forgetting.